The Practicality of Endgame Studies

You may have noticed that from time to time I mention that solving studies was something I was encouraged to do when I first started taking chess lessons.

In fact, if you read my "other" blog at http://www.chessiq.com/blog/ then you will see me talk about them even more often.

The reason that studies can be very practical is that often times the study is based on one aspect of the position that if you could change it would lead to a win. 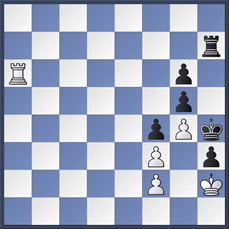 This is a study that I just finished solving.  It's White to play and win.

The reason that I find this to be practical is that while this position isn't that likely to occur in a game, the idea itself is.

If you would like to take a crack at solving the study first please do so.  Then continue reading below once you have worked this

When I began looking at this position the first thing that became immediately obvious was that Black's king can't move.  With that in mind it's a simple deduction that if White can give check it's going to be mate.

So how can White give check.  The obvious way is along the h file.  Of course the problem is how to move Black's rook off the h file?  I couldn't figure out a way in which to do so.  The Black rook can shuffle endlessly between h6, h7, and h8 and there is no way for White to attack all of those squares simultaneously with just a rook.  And clearly the White king can't run around to help since Black's h pawn would promote.

So the next evolution in my thinking was that if there was a way to give a check from the White side of the board on the h file then that might win as well.  The issue is that I couldn't find a way to get the White king out of the way and even if I could there is no way to then insert the rook so that it can capture the pawn while being guarded by the king in order to deliver mate.

Seeing all of that you now see that if there was a way to prevent Black from swinging his rook over to the e/d/c/b file then White would have a vital tempo needed for the Ra1 - Rg1 - Rg3 plan.

Which makes the solution suddenly obvious...1.Ra8.  This forces 1...Rh6 to prevent 2.Rh8+ leading to mate.  Now White plays 2.Ra1 and with the pawn on g6 blocking his rook Black has no defense.

The idea being that while this position isn't likely to occur over the board, the idea of winning a vital tempo will.  And that is something that has a practical application OTB.
Posted by Chris at 1:39 PM

Chris
I started playing in chess tournaments in 1988. I stopped in 1992 at the age of 19 with a rating of 1526. In 2011 I decided to start playing again. I had played perhaps as many as five casual games in the 19 year interim so I was literally starting over. My goal is to make master. I want to show that it is in fact possible to do so as an adult. As I begin this blog in Feb 2013 my rating is 1710.