Review of And Action! How to Crown Positional Play by Tactics - fritztrainer DVD by ChessBase

ChessBase was kind enough to send me two of their recent DVD releases to review, and so it was with great anticipation that I sat down to watch this DVD by renowned grandmaster Alexei Shirov.

One of the more famous quotes by the sixth world champion, Mikhail Botvinnik is “Tactics are the servants of strategy.”  In this excellent DVD in the fritztrainer series by ChessBase world class GM Alexei Shirov sets out to prove just that.


There are few names as associated with tactical flair as that of Shirov.  Yet, as Shirov himself notes in the introduction he always has felt that having tactical finishes present themselves in his games means that he is a solid positional player.  The truth is that he is absolutely right, and in this DVD he sets out to show the viewer just that.


The DVD is divided into six chapters.  They are:


Each of those chapters titles contain both a hyperlink to the ChessBase files containing the starting position and the analysis of each tactic, as well as a video link which launches a video of GM Shirov playing through each example while giving his analysis of each of the positions.

For those who aren’t familiar with the fritztrainer DVD series, here are some things you should know.  You will need a computer to view the DVD.  The DVD integrates video clips of the presenter, along with a board that uses ChessBase Light.  If you are not already a ChessBase Light user don’t worry, because the files are included on the DVD for easy installation!

In addition to the video clips of the presenter demonstrating the material there are also hyperlinks to the game fragments with analysis in a ChessBase file that you can play through in ChessBase Light.  One of the benefits to this is that you can then play through any sidelines you may want to explore on your own and you can do so with an engine running to check your ideas!  In this way you can come to more fully understand the position and the ideas contained within it.

When you pull up ChessBase Light you are shown a graphical depiction of a board, like so:


A nice benefit to the fritztrainer DVD’s is that if you are wanting to follow something from the Black point of view you can simply his Ctrl+F on your keyboard and the position will be flipped around to the other point of view, like this:

To flip the board back to the original viewpoint simply hit Ctrl+F again.


In the first chapter GM Shirov starts out with a number of relatively easy examples that are designed to serve as a series of warm up exercises in order for the viewer to gather their mental energies for the more serious efforts to come.


Let’s take a look at one of those examples: 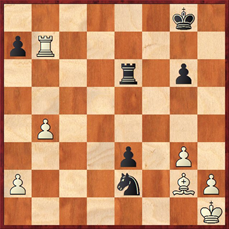 
This is one of Shirov’s earlier games, played four years prior to achieving the GM title and is the first example shown in the video.

After giving some background information about the game and the position, the viewer is then encouraged to pause the video in order to attempt to find the solution on their own.’

To me this seems to be a very overlooked aspect of chess improvement.  It seems that in today’s age of videos the temptation is often great to take the shortcut and simply play the solution without pausing to first attempt it ourselves.

In fact, that temptation is so great that modern chess books are starting to comment on the phenomena.  In fact, two come to mind immediately.  Move First, Think Later by Wily Hendriks and Studying Chess Made Easy by Andy Soltis both touch on the subject.  IM Hendriks by pointing out that the real improvement from reading a chess book comes from solving the puzzles rather than just reading through the solutions, and GM Soltis by stating that one of the most basic ways to improve it to treat every diagram as a lesson.


In the example above, the solution is:

Another interesting example from the first chapter is a game between Shirov and Ivanchuk.  One of the most fascinating aspects of this game is that as Shirov himself points out in the introduction to the position, it’s not too often that a game between two elite grandmasters is decided by a simple tactic.

Again, the tactic is not too difficult.  White wins by playing:

After the initial chapter GM Shirov moves on to a slightly more taxing subject; how attacks are formed.  In this chapter the idea is not to solve the positions as much as it is to pay attention to Shirov as he works through the variations that he played or calculated over the board.

A nice example given in this chapter is a game between two future super GM’s, Alexei Shirov and Loek Van Wely.


This is the position reached after White’s 20th move.  Here Shirov starts with the comment: “ White is prepared to answer 20...h5 with 21.h3. Does Black have to defend the queenside or he has something stronger?”

He then shows how the attack was successfully formulated and then carried out with:


I will conclude this review with an example from the final chapter so that readers can get a good feel for the level of complexity present by GM Shirov.

In summing up this DVD I would have to say that it contains something for players of practically any strength.  If you are rated anywhere from 1200 up there is something here for you.  While the more advanced material will definitely be too complicated for many viewers, the first few chapters are much more widely accessible for players of all strengths.


Not to mention that this is a DVD that should be reviewed again and again as you improve so that you will more fully absorb the ideas over time.

To me this was like a five hour lecture with one of the best attackers of the last 20 years.  I think that GM Shirov definitely achieves his goal of showing how games that conclude with spectacular tactical fireworks tend to begin with solid positional achievement.


I give this five out of five stars!
You may purchase this fine DVD (or even download it!) here:
http://chessbase-shop.com/en/products/shirov_and_action_how_to_crown_positional_play_by_tactics

Chris
I started playing in chess tournaments in 1988. I stopped in 1992 at the age of 19 with a rating of 1526. In 2011 I decided to start playing again. I had played perhaps as many as five casual games in the 19 year interim so I was literally starting over. My goal is to make master. I want to show that it is in fact possible to do so as an adult. As I begin this blog in Feb 2013 my rating is 1710.